And now for something completely different!  The one; The only; It’s Coco’s Palace!  The only Yunnan Chinese restaurant in New York. Is it in Chinatown?  NO!  In Flushing?  NO!  In Great Neck??  YEAH!  That’s right.  Long Island!  A burgeoning new leader in bringing you authentic Chinese food, and now authentic Yuannan Cuisine!

Yunnan cuisine, alternatively known as Dian cuisine, is an amalgam of the cuisines of the Han Chinese and other ethnic minority groups in Yunnan Province in southwestern China.  Many Yunnan dishes are quite spicy, and mushrooms are featured prominently. Flowers, ferns, algae, and insects may also be eaten.

Coco’s Palace opened a few months ago, and it’s sure catching on.  We got there at 7:00 pm on a Wednesday (Public Service Announcement:  They are closed on Tuesdays) and the restaurant was relatively empty which gave me a chance to take a few pictures of the interior.  Everything, as you would expect from a new restaurant was sparkling clean.  But, they took this even a step above.  If this restaurant was one block west, i.e. in New York City, I’m certain that the New York City Department of Health would have given it an “A” rating.  The copper hot pots (another PSA: only served in winter) were just sparkling and looked like they could have been a museum exhibit. 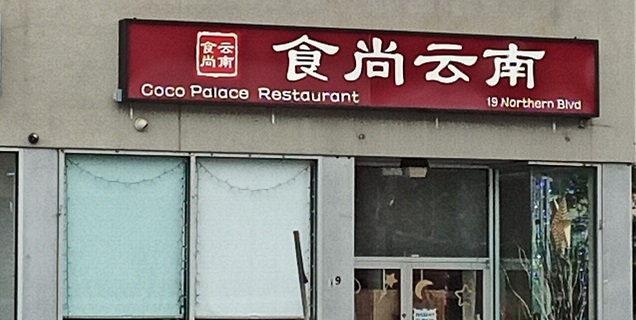 It was time to eat.  As you would expect there are lots of noodle and rice dishes on the extensive menu.  We consulted frequently with our Server, Tony, who guided us through the meal, which was really a feast!

We started off with five appetizers.  Appetizers were generally on the smaller side, but enough for the five of us to still get a nice taste:

A2: Pork Wonton with Spicy and Sour Sauce – Loved this!  The wonton wrappers were just right; the filling fantastic.  Definitely made fresh.  Great start!

A3: Yuannan Dai Style Cucumber Salad – a nice cool dish that offset the spiciness of the other appetizers.  Cucumbers were well marinated, yet still crisp to the bite.

A5: Jinpo Style Chicken – served cold and in a lemon and spicy sauce.  The chicken was FANTASTIC!  I could have had a few portions of this dish!  Give me more!

Sometimes, one has to let a picture do all the taking.

Especially when sometimes I managed to miss a dish amongst the forest of dishes.  Please tell us what YOU think about this dish in the comments below.

A14: Roast Marinated Pork Knuckle – This was a first for all of us.  First time eating knuckles.  I used to bite my fingernails, but never knuckles.  Until now.  The dish was advertised as spicy, but this was mild at best.  The pork was ok.  The least favorite of the fabulous other appetizers we had.

H1: Grilled Whole Fish with Spicy Herbs – The fish was Bronzini. The fish was good. So light; So moist; So succulent.  It’s wrapped in bacon and baked in aluminum foil to maintain all its juices.  It wasn’t long before there was nothing but a skeleton left.  I’m not sure what happened to the eyes.  I am sworn to the Quest Creed that whatever happens on a Quest stays on the Quest.

H2: Yunnan Dai Style Shrimp (Fried Prawn) – Can be eaten in the shell; I opted to peel and eat.  The prawns were each served on a buckwheat cracker, for lack of a better word, which in an of itself was so delicious.  I would love to buy some just to snack on!  I didn’t hesitate to snag the last prawn when offered to me (I am on a Seafood Diet — when I see food I eat it!).

The “Y” denotes the Yunnan Oriental Noodle and Rice dishes.

Y1: Yunnan Oriental Style Rice Noodle – Throw the noodles in after a few minutes of cooking, and then served of course in bowls.  I loved the broth and the shrimp.  But there was everything in this dish (probably including the kitchen sink!).  I love how it comes out to your table in a wooden attache case!

They say that a picture is worth a 1000 words, so a video must be worth a Pulitzer Prize?

(If you liked this video, please subscribe to our YouTube Channel where we have posted many more videos)

If I heard correctly, these were made especially for us by Tony’s wife.  Quite a few fresh blueberries.  A nice sweet treat.   This is a Chinese Dessert to write about!

Throw in two bowls of white rice and a soda, and I was totally shocked at the bill.  The bronzini dish alone was $24.95.  So how much would the bill be for five appetizers and four main dishes?  My guess was so far off, that I should be banned from ever guessing again.  Would you believe $119.82 including tax?  Believe it!

Have you ever had Yunnan Cuisine before?  Does our review whet your appetizer for some?  Please share your comments in the box at the bottom of the page, and please share this article if you think others would enjoy reading it.

Humbly submitted for your consumption,

Please share this article so others can enjoy it!

What is Yunnan Cuisine? How good is Coco’s Palace?

We are glad you asked. You are going to want to know.

Other Articles by Author

This site uses Akismet to reduce spam. Learn how your comment data is processed.

For unbiased reviews of Chinese restaurants…

Join us on our Quest to find the BEST Chinese restaurant on Long Island and New York City.

Subscribe today to be notified of new reviews and new articles: